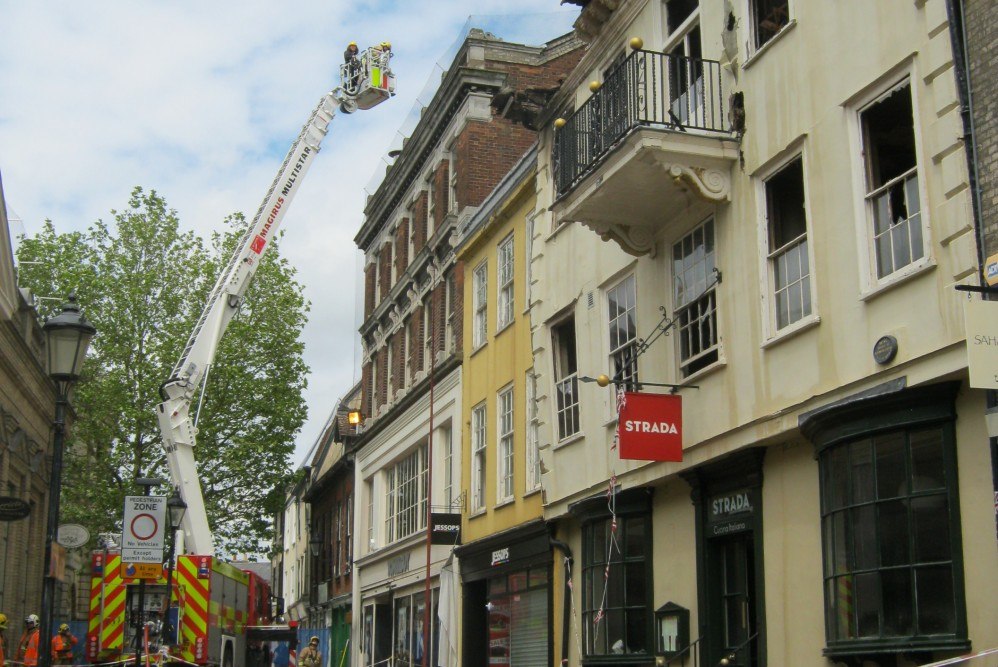 Storm damage to the high level roof cladding resulted in the need for replacement of sheeting to the roof of a steelworks. Assistance was provided in assessing the extent of damage that had occurred to allow the insured loss to be determined when taking into account pre-existing degradation.

Flooding caused extensive damage to a national distribution centre, resulting in damage to office buildings and warehouses. Richard Jackson Ltd provided assistance in assessing the damage as a result of the event on behalf of insurers and the extent of the insured losses.

Consideration had to be given to pre-existing features when assessing the insured loss. Following a fire at a college in the Midlands, Richard Jackson Ltd have been retained to assist insurers by working with the insured’s team to mitigate the loss and establish the extent of claim on a significant Grade II Listed Building, the building being extensively damaged by fire and the water used in the fire fighting process.

We have been retained to provide a Project Management and Structural Engineering role following a fire at an Adult Education College in Birmingham. The fire significantly damaged the roof and 2nd floor with water damage elsewhere. Providing a swift response and implementing a programme of works to allow the college to re-occupy the reinstated building in phases, to minimise disruption to its activities, was a major consideration.

A fire destroyed a film studios used for major productions, Richard Jackson Ltd assisted insurers in assessing the damage caused along with monitoring the reconstruction to differentiate between insured losses and insured’s own works. Meeting a tight programme was essential to allow the facility to be available for use on a potential blockbuster film.

Other examples of major losses on which Richard Jackson Ltd have been involved include a fire at an oil field supply facility in Scotland, a fire at a multi-storey block of flats and involvement on numerous claims following damage as a result of the Buncefield explosion. Our experience in the insurance sector allows us to determine the extent of losses and ensure reasonable steps are taken by the insured to mitigate costs.